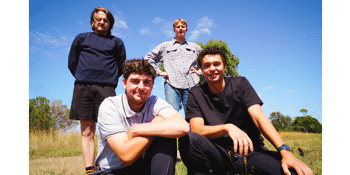 Geelong’s premier rock group Vintage Crop celebrate the release of their new album with a tour around (some of) Australia. It’s been years since they’ve played outside of Victoria, but the band are soon to be regulars at Avalon Airport; as they’re jetting off to play shows for their rabid & avid fans interstate all across August & September.

Their latest record, Kibitzer (out via Anti-Fade Records), is the groups fourth full-length in the space of 6 years and is undoubtably their strongest yet. NME say it’s full of “buzzy, frenetic energy”, Beats To The Bar say its “supremely confident post-punk” - but they’re only music writers. What do you think? Catch Vintage Crop at one of their upcoming shows and let them know.