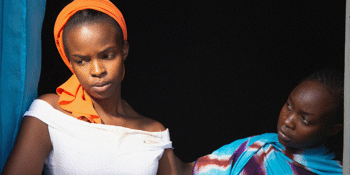 In Chad, where religion rules with an iron fist, a teenage girl seeks to end her pregnancy.

Amina, a single mother in a conservative village, lives a hand-to-mouth existence with her daughter, Maria. When the 15-year-old reveals that she is pregnant and wants to have an abortion, Amina is initially caught between her Muslim faith and her desire to spare her child from enduring the experiences she herself suffered as a socially ostracised teenage mother. But if the latter is to be achieved, the funds must be raised – and Amina will have to call on the aid of a secret network of women.

Screening in competition at Cannes in 2021 and subsequently receiving nominations and awards at Hamburg, London and Torino, Mahamat-Saleh Haroun’s (Grigris, MIFF 2013; Dry Season, MIFF 2007) latest drama is a ferociously penetrating, defiantly feminist work. Every scene and shot seethes with an air of desperation in the face of open danger, yet the overall effect is one of poetic, empathetic sophistication as Amina and Maria figure out their best path. Not only reflecting the intersection of patriarchy and resistance in central Africa, Lingui, the Sacred Bonds also offers a reminder of how community solidarity can effect social change.

“An electric liberation story … Haroun has a gift for distilling volumes of meaning in his direct, lucid, balanced visuals.” – New York Times