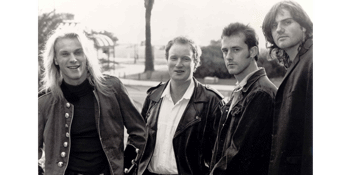 with special guests INTOXICA
Theatre Royal, Castlemaine (Castlemaine, VIC)
Friday, 26 August 2022 8:00 pm
7 days away
18 Plus
Music
Send this event to
Get ready to rock like it&#39;s 1986 with a rare performance from Melbourne&#39;s legendary and much-
loved Huxton Creepers! With very special guests Intoxica!
The Huxton Creepers were the first of a new generation of punchy power pop and &#39;60s-inspired
rock&#39;n&#39;roll guitar bands in Melbourne in the early ‘80s; our own version of the Sunnyboys and the
Hoodoo Gurus.  United by a love of The Saints, The Flamin’ Groovies, Iggy Pop, Radio Birdman,
Blondie, Creedence Clearwater Revival and the like – all of whom they memorably covered at
different points in their career - the Creepers won a generation of fans on the back of their always
rocking live performances and some great records.
Performing in regional Victoria for the first time in over a decade, the original Huxton Creepers (lead
singer Rob Craw, guitarist Paul Thomas, later of Weddings Parties Anything and the rhythm section
of Matthew Eddy and Archie Law) will crank out their hits like &quot;My Cherie Amour&quot;, &quot;The Murderess&quot;,
&quot;I Will Persuade You&quot; and &quot;Autumn Leaves&quot; as well as fan faves including &quot;Shake Some Action&quot;.
Joining the band as they traverse the Time Tunnel will be long time Melbourne faves Intoxica (who
were born out of two bands who shared many a stage with the Creepers back in the day, the Corpse
Grinders and the Olympic Sideburns.